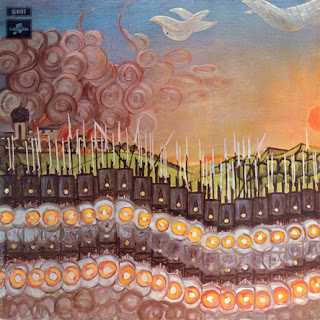 
ACCOLADE were a short-lived band (1969-1971) whose musical emphasis was on combining acoustic instrumentation and light jazz/fusion arrangements with bucolic British folk lyrics and sensibilities. They released just two albums and a single in their brief tenure, though managed to tour throughout most of their active existence. The original lineup consisted of woodwind player Brian Cresswell, singer/guitarist Gordon Giltrap, drummer Ian Hoyle and guitarist Don Partridge.

The band's first album included their most lasting contribution to music in the form of a version of American bassist eden ahbez' (aka George Aberle aka Eden Abba) "Nature Boy", a languid and complex folk tale first recorded by NAT KING COLE in the 1940's, and since covered more than seventy times, including by MILES DAVIS, HARRY CONNICK JR, CELINE DION, JAMES BROWN, JOSE FELICIANO, the GATHERING's Annie Haslam, and most recently by the Greek psych band WILL-O-THE WISP. The song has charted as a single five times in that period.

Pool would depart the band after a 1970 tour incident in Sweden involving Partridge, touring briefly with COLOSSEUM before leaving the music business altogether for a career in graphic design (Giltrap had already left by that time and would go on to a lucrative solo career). Guitarist Wizz Jones would join for the band's second album, which was released only in the UK; and they dissolved shortly after its release.


This is one of those albums that, like Incredible String Band’s ‘The 5000 Spirits or the Layers of the Onion’ or the Pentangle’s debut, helped really define the understated range of progressive folk music in the late sixties; this despite becoming a rather obscure and little-known bit of the genre’s history. The nine all-acoustic tracks showcase a style of jazz-tinted folk that incorporated some of the finest nuances of singer-songwriter stylings, rock tempo, jazzy improvisation and British folk into something that had little parallel in its day. The result is an album that grows in appeal with every listen even forty years after its release.One thing should be noted though; this was not a band made up of grammar school chums or unknown amateurs. In fact, virtually everyone in the band was an established musician of some merit prior to its formation in late 1968. Guitarist Gordon Giltrap had already released a couple solo folk albums and was on his way to a lengthy and prolific career. Founder Don Partridge had been (and would become again) a street musician who had to his credit a couple of unlikely hit singles on the late sixties British charts (“Rosie” and “Blue Eyes”). And bassist Malcolm Poole, who would replace original bassist Eden Abba (more about him later) somewhere between the beginning of these studio sessions and the band’s second album, was an alumnus of the Artwoods, a mid-sixties blues-rock band that included future Deep Purple keyboardist Jon Lord and Ron Wood’s older brother Arthur in its lineup. Drummer Ian Hoyle was a relative unknown but would go on to appear on at least one Wizz Jones album, and flautist/ saxophonist Brian Cresswell appears to have been the only formally educated musician in the group.
I’m not really clear on the background of the band’s formation, but there was clearly an attempt with their music to jazz-up (literally) British folk music with some rock and varied arrangements, while at the same time keeping a focus on acoustic instrumentation and storytelling lyrics in the finest tradition of British and other Anglo folk music. The net result, like I said before, will grow on prog folk fans with repeated listens.
One band I would point to as appearing to have been influenced by this group’s music is the modern Greek folk band Will-o-the Wisp. That band’s vocalist Aggelos Gerakitis bears a striking resemblance to Accolade’s Partridge, and their cover of bassist Eden Abba’s original “Nature Boy” reinforces my suspicion that at least a couple members of that band have this record in their collection.
Speaking of Abba, his song “Nature Boy” appeared for the first time (to the best of my knowledge) as a Nat King Cole single in 1948. It has since of course been covered by scores of artists, has appeared in numerous films and television series, and became the title of a biography about Abba’s life written shortly after his death due to an auto accident in 1995. There’s a fascinating person if you ever feel like digging into his history.
The most interesting thing about the tracks on this album is the palpable amount of familiarity you feel with them even on the first playing. From the opening “Maiden Flight Eliza” with its lively flute and West Coast harmonizing, to the closing languid ballad “Go on Home” and its almost America (the band) sounding peacefulness; this album is full of comfortable, comforting and casual folk music imbued with just enough modern touches to make it still palatable years after its initial release (and possibly even more so considering how little impression it made back in 1969/1970).
Top tracks are without a doubt “Nature Boy” and the lengthy, rambling folk pseudo-biographical sketch “Ulysses”. This album and these songs could never be made today; only the diversity and free-thinking air of the times allowed them to come into being even then, and frankly too few music fans of those times appreciated the simple and sincere beauty of these songs even then.
I don’t suppose this qualifies as a masterpiece, but it certainly deserves recognition as one of the seminal works of the progressive folk genre, and I suspect it is much more well-known to many modern folk musicians today than it is to fans of their music. Well worth seeking out, and highly recommended to prog folk fans of nearly every stripe, but near-essential for any serious prog folk lover
Gepost door Jotavich op 10:12