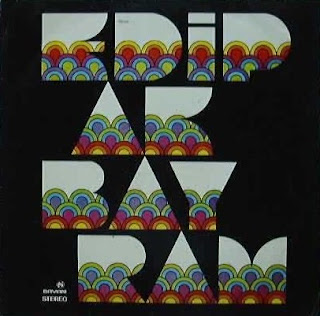 First readily available reissue/compilation of material by this famous Turkish psych musician from the early '70s. Edip Akbayram is the top of the BIG three of Turkish delights (Erkin Koray, Baris Mancho & Edip). This release includes the best psych tracks from his first two albums and many singles -- 22 tracks, 90 minutes of music. His band Dostlar formed the songs into something which takes you on an Eastern trip, full of fuzz guitar, electric sax and great percussions. Edip's dark voice makes you shiver and you feel like dancing right away. This is as good as Erkin Koray -- deeply spiritual and charged with politically powerful lyrics. This release stands as one of the Shadoks reissue classics.
Glad tidings for Turkish psych freaks, or those soon to become Turkish psych freaks (just give this a listen!): here's a new must-have collection crammed full of swirling, fuzzed-out electric saz, impassioned vocals, and traditional Turkish folk gone funk! If you are indeed into the groovy East-meets-West psychedelia that flourished in Istanbul back in the '60s and '70s, artists like Mogollar, 3 Hur-el, Baris Manco, and Erkin Koray, chances are you may already be familiar with Edip Akbayram and his band Dostlar (formed in '73). This new Edip Akbayram double disc on the Shadoks label contains 24 tracks, including ten of the 14 cuts found on that previous reissue (meaning, if you already have that cd, you still will want this for the whole disc and then some of songs you don't have... and you can't get rid of the Nedir reissue either if you want those four songs that don't overlap). So this is definitely the Edip set to get at any rate.

The colorful music of Edip Akbayram and Dostlar is pretty much the hardest-rockin' all the Turkish psych acts of the era I've heard...darn heavy in spots. The Anatolian folk-rock of the sixties is blended with a polyester '70s wah-wah funked-up progginess here. It's vibrant and colorful music to make you feel like you're in some smoky, swinging nightclub on one of the warren of narrow, twisting side-streets off of the hip main drag Istiklal in the Beyoglu neighborhood of Istanbul, back in the day, sweating on the dance floor or sitting back, sucking on a hookah.

The cd booklet is full of cool photos, and a page of liner notes, giving Edip's bio but no info on the tracks themselves, Apart that it includes his first albums plus singles and demos. However, they do include English translations of the song titles, which should give some idea of Edip's seemingly dire outlook on life (or the outlook shared by his Turkish folk sources), with such songs as "Sorrow And More Sorrow", "Miserable", "In Vain", "Our Village Is Full Of Smoke", "Don't Touch My Sad Soul", "Tyrant", "Gallows Pole" and even "My Car Broke Down"! Sounds like a bummer, yet many of these tracks are amazingly upbeat musically!